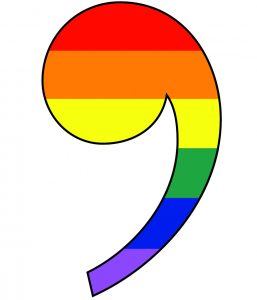 Punctuation’s main purpose is to signal to the reader what parts of the sentence go together.  And more complicated information leads to complicated sentences!  So be sure and go over your paper looking for sentence problems. Fixing those will help you communicate more clearly to the reader.

In my teaching and editing careers, I have corrected a lot of comma mistakes! So here are some of the most common comma issues, along with some guidelines…. it’s the meaning that matters, so know the rules, but know your meaning too. Usually the rules and what creates the right meaning will coincide (that’s why the rules evolved, because both readers and writers agree on the usual meaning). Just don’t go against the rules without good reason.

1) Introductory phrases are usually set off by a comma to make it clear what’s the introductory phrase and what’s the main clause.  In 1880, London citizens were paralyzed with fear because of Jack the Ripper.
Separate the intro phrase from the subject “London citizens” so that readers understand that “London” goes with “citizens” and not “1880”; it`s not “In 1880 London, citizens were paralyzed….”

2) At the end of the sentence, there`s more flexibility. Commas can clarify meaning, so use them if necessary.  “You are enjoying this little spot of torture,  aren’t you?” John said, sticking the poker back in the fire.
“Aren’t you?” is a tag question, and those are always set off by commas, as they are separate clauses. The participial phrase “sticking…” is set off with a comma because it is an action that goes along with his speech, not how he speaks– that is, it is a separate unit of additional meaning there.

“I`m serious, Prince Harry! Marry me, or I`ll turn you into a frog,” the witch said.

Pete, thanks for the help.

4) Appositives are descriptors that tell more about a noun. A one-word appositive or a single name-appositive usually doesn`t need a comma. Tom looked particularly smashing in the color blue. (Blue is the appositive describing the word “color”.)
Darla went looking for her boyfriend William. (William is the name-appositive for “boyfriend”.)

But most appositives are set off with commas.
The policewoman packed her usual weapon, a Glock, in her bag. (A Glock is the appositive for “weapons”.)
An experienced birdwatcher, Miles knew exactly the sort of haunts favored by the rubythroated warbler.

(An experienced birdwatcher   is the appositive for Miles.)

5) Quotes and quote tags (she said) require special handling. If you attach a quote directly to a quote tag, then put a comma inside the close-quote.

If the quote tag interrupts the speech, things get more complicated. Are you interrupting a sentence? Then comma both sides of the quote tag.  “Now, Fawn,” Trudy said, “you promised to be nice to Angela.”

But if there are two separate sentences, only one (usually the first) should be attached to the quote tag.  “Now, Fawn, you promised to be nice,” Trudy said. “Angela is only here to help. Stop pretending to gag at her name, or I’ll ground you.”

6) Complex and compound sentences (which have more than one clause– subject plus predicate) very often use a comma to separate clauses.
Complex sentences have a dependent clause plus independent clause. A dependent clausehas a subject and predicate, but will be a sentence fragment if by itself as there`s a “subordinating” or “dependent” conjunction that diminishes it, like although Linda never wanted to hurt anyone. There are many subordinating conjunctions, but some of the most common are although, since, because, if, after, until, as, when.

David hadn’t been able to look at Muffy since he found out that she’d been embezzling. (Trailing dependent clause.)

See, here is a situation where my knowing the rule lets me decide to break the rule under certain circumstances.
I tend to use a comma before a trailing dependent clause when I think it enhances the meaning of the particular sentence. That’s more common with certain conjunctions, and certain situations… try the sentence both ways and see which works best for you. I notice I’ll often go with a comma more with a longer sentence or one with several modifiers.
After the concert, Ricky walked slowly by Lucy’s apartment again, though he knew she was in there with Tom.
In this case, “slowly” and “again” are both adverbs modifying “walked”, and “by Lucy’s apartment” and “after the concert” are a prepositional phrase acting as an adverb. (Adverbs tell how or where or when something is done– the verb that is… how, where, and when did he walk?)

With so many modifiers, I’d set off that final dependent clause so it doesn’t get lost.

Compound sentences have two independent clauses. Usually these are connected by a comma plus a coordinating conjunction. The most common coordinating conjunctions are and, but, so, or, then. These conjunctions “coordinate” because they show the connection or relationship between the event or condition in the first clause and the one in the second clause. For example, and means “connected”, but means “in conflict or in contrast”, so means “cause and effect”, or means “alternatively”, then means “sequentially in time or as a consequence.” 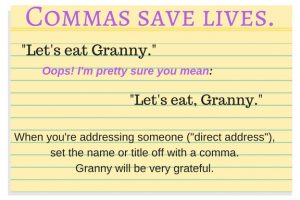 (Independent clauses can also be connected by a semicolon, though this should probably be rare. Too many semicolons, however legal, look like you’re trying too hard, like a 12-year-old wearing mascara.)

Unless the sentence is very short (Grace tried but she failed), go with a comma plus one of the conjunctions. Matthew would always be a part of her life, but maybe Tom could be too.

Lawrence pretended to be listening to her sing “R-E-S-P-E-C-T,” but really he was wondering how he was going to tell the boss that they didn`t have enough to make payroll.

Either these bikers were unaware that the Assassin lived in Wheredale, or, more likely, her lethal challenge was part of the town’s appeal. (More likely is the parenthetical.)

Lola was, how shall I put it, a coldhearted monster.

Cornelia spoke her mind, yeah, and I thought that was refreshing, not that she cared what I thought.

If the parenthetical is actually in parentheses, btw, there`s usually no need for commas.
Louis tilted his head (another new gesture) and listened for a wolf howl.

8) Items in a series are separated by commas. Don`t pay attention to that journalistic rule that dispenses with “the terminal comma” before the and. That can confuse, and takes away a writer`s flexibility.

Now see why it`s important to maintain the distinction created by the terminal comma. With tears in her eyes, Muffy accepted the Best Actress Trophy and said, “I wouldn’t deserve this without the support of my sisters, Lisa and Joan.” The reader knows that Lisa and Joan are the names of her sisters, not two additional unrelated friends. That is, the lack of the terminal comma is what clues us in that Lisa and Joan are not items in a series, but rather the appositive for the noun sisters.

The best way I’ve found to learn how sentences work is to diagram sentences. This gives you a graphic and hands-on way to analyze what roles different words and phrases play. Here’s a great site with lots of sentence diagramming exercises. Be sure and find the “Enter” button in the middle of the front page to get access to the exercises. Really, this is fun! Trust me!