This will start out boring for non-punctuation-lovers, but then I’ll quote Robert Frost, which is always a great benefit to society. So slog through the boring part to get to the poetry and my explanation of how Frost shows how important it is to “know the rules, then break them.”

For some reason, the final comma in a series (before the “and”) is called the Oxford comma, but it’s also called the “serial comma”. The rule is, when you have a series of three or more items in a row, with “and” before the last one, you put a comma before the “and” so that there’s a comma after each item. So: The US flag is red, white, and blue.

This is done differently in journalism, where they used to have to save space and ink and so eliminated as many comma rules as they could.  So you’ll see the “and” without a comma before in magazine and newspapers and often on news websites too.

Academic writing, however, follows the rules of book publishing, and the “Oxford comma” is the convention there. Just a minor change, and as I said, this is a rule in academic and book writing, so you’ll often see series without that comma in the popular press.

More about the “Oxford comma”

What About Robert Frost, You Ask? 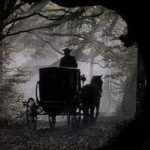 The great American poet Robert Frost surely knew the rules. No one made better use of the conventions of the language and grammar than he did in creating his deceptively simple and lovely poems. He’s a great example of how understanding the convention (and how the reader would conventionally read something) in order to subvert it for a greater or deeper meaning– punctuation becomes subtext.

Now as I said above, the general rule followed by book editors and publishers is that when there is a series of three or more like items (like three adjectives), you place a comma before the “and” or the last item in the series, indicating that these are all basically similar and yet separate from each other.

So with Frost’s poem in manuscript, the book editor (or, as the Frost myth goes, the typesetter of the book, cleaning up after the editor ) saw this line with this series:

The woods are lovely, dark and deep

Well, of course the punctilious editor/typesetter made haste to add that Oxford comma– the RULE. The woods are lovely, dark, and deep. And usually, that would have been exactly correct.

However, again according to myth, Frost saw the proofs and quickly “stetted” or insisted that the original be maintained.

Why? Was Frost being stupid? Did he not know the rule?

He knew the rule. He knew what effect abiding by the rule would create for the reader. And he knew he wanted another effect, one that could be achieved by subverting the rule.

Let’s look at the two meanings– comma in or comma out.

Here’s the entire stanza. This is the final verse of that achingly beautiful poem, “Stopping by Woods on a Snowy Evening”.  (You can read the whole poem, and you really should, here at the Poetry Foundation.)

The woods are lovely, dark and deep,

So this was what Frost ended up with– what he started with, what he wanted– comma out.

Why did he insist on that change, or rather, the change back? The defiance of convention?

Let’s look at the meaning conveyed by each option.

The woods are lovely, dark, and deep.

With that comma in, the three adjectives are “equal in weight”. That is:

They each modify or describe “the woods”.

Now take the comma out, and see what happens:

The woods are lovely, dark and deep.

With the comma out, the “dark and deep” now modify “lovely”:

The woods are lovely, because they are dark and deep.

The first is a placid and unremarkable (though perfect in its scansion :) description of the woods.

The second is a subtextual confession of the longing for “darkness and depth”.

Here is a man who has stopped by a snowy woods on a winter evening, a man weary of his responsibilities, his “promises to keep”, and momentarily transfixed by the “loveliness” of the woods. And what is lovely about them to him? The darkness and depth. The death. (This is poetry, so it won’t be transparent. This is Frost, so we must always search beneath the extraordinary “prettiness” of his prose to find the deep meaning he embeds.)

He looks at the woods. He finds the darkness and depth “lovely”. He thinks of… well. No. He can’t do that. He has promises to keep, and miles to go before he sleeps.

We have just witnessed a man choosing life.

Those final lines (repeated just to make you ponder this):

Those would have little resonance if all that had just happened was the man stopped and saw the pretty woods and commented on how they are “lovely, dark, and deep.”

Coming after that line with the missing comma, however?

They mean he’s made a choice. He will not succumb to the “lovely dark and depth.” He will keep those promises and trudge those miles and then sink into a temporary (not permanent) sleep.

Frost knew the rules. He chose to break them– for a very specific effect. That effect could happen only if he could trust that most readers would know how it “should” be punctuated, and stop and wonder why the comma was left out.

And then we can choose to subvert the rules to achieve a different effect.

It’s not just breaking the rules to be defiant or because we’re ignorant… but accepting the rules, knowing that they create a conventional meaning, knowing that now the reader– trained in the conventions– will be surprised and thoughtful in discovering this new meaning.

We are in control of our own voice. But we need to take control. We need to know more about the language and how it can be manipulated– and most important, we need to know how the reader will interpret our choices.

Well, heck, time to go read that whole poem. I encountered this first in 5th grade at St. Aidan’s School in Boston. Interestingly, the nun (nuns weren’t known then for cross-curricular pedagogical innovations) Sister Hugh had us put this poem to music, and I could still sing our ballad if you want. (You don’t.) I thought it was the most beautiful poem in the world then. (I’m still pretty in love with it.)