Any thoughts about what pacing is and how to make it work in a novel?

It all comes down to scenes!

I think of pacing as making sure that important events happen frequently enough that the reader doesn’t get a chance to quit reading.  That doesn’t mean every scene has a turning point, but every scene has to have some event that affects the overall plot, or that scene is basically “skippable”.  And every scene can help set up for a later turning point.

So my first trick is The “Cause, Change, and Effect” Events Trick

Every scene should have an event that affects the plot in some way, however minor. 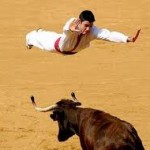 There should be some measurable change that happens because of this event.  I have to say, as soon as I started applying this rule, my pacing picked up, because the plot had more events and more changes.

It really helped to think of the scene building towards this event– gave me a real purpose for the scene.  For example, I might have planned as the event “Genia finds her mother’s safe deposit key in Bill’s glove compartment.”  How is it a plot-changing event? “She realizes that Bill’s been lying to her (romantic effect) and she now can use the key to find the missing will (external effect).”

It’s also really helpful if the event propels the plot into the next scene– say in the next scene she goes to the safe deposit box and opens it with the key and finds not the missing will, but a birth certificate of a sister she never knew she had.  This sets up the cause-effect link from scene to scene that keeps readers reading to find out what’s going to happen.

My second trick is The Set Timebombs in Advance Trick

Scenes should set up if possible for later Big Events or turning points.  I think of these as “timebombs” that are set in one scene and explode several  scenes later.

For example, let’s say that in Chapter 9, Genia is going to learn from the birth certificate that the home-care nurse Terri she suspects of murdering Mom is actually Mom’s older daughter, given up early for adoption and back in Mom’s life in the last year.

Big revelation, obviously.  We have Genia reeling from this news, and thinking back, so that’s why Mom always treated Terri so kindly, gave her that car for Xmas!  I was right to be jealous and feel like Mom was preferring her to me!

BUT… there will be no force there -unless- you’ve set this up earlier.

For example, this should not be the first time Terri appears.  She should, in fact, probably appear in an early scene with Mom AND Genia.  That is, we need to make the connection early, that Terri and Mom are somehow in this triangulation with Genia, even if G doesn’t quite understand it.

Second, we need to set up that Mom is treating Terri specially, and Genia must notice it and probably comment on it. This should happen in chapter earlier than the discovery of the secret.

Third, we have to put that gift car in there, probably in a fun way, like Genia notices Terri is driving a car just like Mom’s, and mentions it, and Mom says, well, it IS my car– I gave it to her– and it makes Genia angry and also starts her thinking that Terri is exploiting Mom.

And we probably also have to beef up the internal subplot of Genia’s relationship with Mom– if it’s completely lovely except for this, probably that won’t work.  The jealousy, Mom preferring Terri (“at least Terri is around-, unlike you!”), suggest a relationship in trouble.  Think about what that will do to Genia’s emotions when Mom dies– maybe on top of grief we’ll have to add a bit of guilt for 1) not being the perfect daughter and 2) not getting along with her at the end of her life.

I think I might also go back and see whether I can slip in something about how it’s hard being the only child when parents are failing, or how at least she doesn’t have to squabble with siblings about what to do with Mom… something to set up the “sibling” motif.

Setting those timebombs in one scene to go off in a later scene can improve pacing by connecting events, creating that “narrative drive” that keeps the reader interested.

But you can see, a lot of replotting is required now that we’ve come up with this Chapter 9 brilliant plot twist… both internal and external replotting.

Don’t know if that’s any help!

My third trick is The Eliminate Downtime Trick

One other thought, and this comes from Merline Lovelace– she suggested trying to keep chapters short, like 10 pages or less, maybe only one or two scenes.  It’s a way of making sure there’s very little downtime and the reader feels like she’s skipping along.

I wish I had really practical advice like that, but my thoughts on pacing are pretty vague.  I also remember Brenda Joyce saying, “Figure out your major turning points, and write fast between them”– that is, if very little is happening, as between major events, summarize!  Use a narrative bridge like “two weeks later, she was still trying to track him down, but…” and then get to the next big event, when she finds him.

I’ve also found that pacing is aided by a compression of time– eight big events taking place in two weeks will “pace” faster than the same eight events in two months.  The less downtime the characters have, the more intense the experience will be.  So I do try to keep the action of the book confined to a couple weeks, if possible, and set up some sort of deadline to enforce that (“Genia must find out the truth about her mother before the reading of the will on Saturday”).

Back to home page-